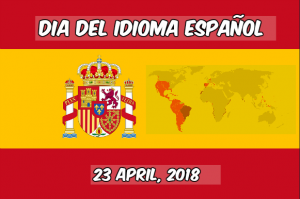 Spanish Language Day celebrates multi-culturism by highlighting the culture and history of the Spanish language through various cultural events and activities. The majority of the vocabulary in the Spanish language is derived from Latin, and it is often considered a language of romance and flare. According to Ethnologue encyclopedia, it is spoken by over 500 million people worldwide and is among the top three most widely spoken languages.

The Spanish culture is very vibrant, with a wide range of dancing styles including flamenco and pasadoble, as well as exciting traditions like Encierro (the running of the bulls) which takes place annually in San Fermin, Spain. Spanish food also has a reputation of being flavourful with rich aromas, particularly in the South American countries. According to the UNESCO World Heritage List, Spain has the third highest number of World Heritage Sites, showing how resilient their culture and physical heritage have been. Saint Lucians must strive to imitate the Spanish manner of keeping their heritage alive through language, so that we can achieve similar results by preserving our culture and creole heritage.

This year on Spanish Language Day, all are encouraged to immerse themselves in not only the language, but the Spanish culture as well! Becoming immersed in another culture enriches one’s life and makes the world more empathetic. This can be achieved by learning some Spanish terms and phrases, cooking a Spanish dish, reading about Spanish traditions and history, or learning the steps to a Spanish dance. As the Spanish saying goes, “Nunca es tarde para aprender” (it is never too late to learn).