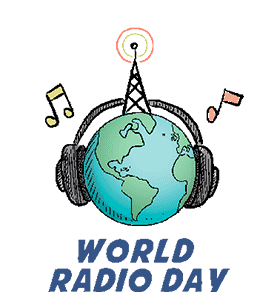 World Radio Day is recognized on 13 February annually, with the aim to celebrate radio as a medium while encouraging international cooperation between broadcasters and promoting access to information and freedom of expression. Radio is reported to be the medium which reaches the widest audience in the world, making it the most powerful low-cost medium in the world. The United Nations Educational, Scientific and Cultural Organisation (UNESCO) encourages all countries to celebrate this day by engaging all partners including local, regional and international broadcasting associations and media organisations, as well as non-governmental organisations and the public at large. 2018 will mark the 7th year of celebration of World Radio Day.

The theme for the 2018 observance of World Radio Day is: Radio and Sports

This year’s theme for World Radio Day highlights the role of sports broadcasting in promoting peace and development and strengthening diversity. The beauty and diversity of sports, which brings unity among people is often showcased through radio broadcasting, while the broadcasting of traditional sports helps promote interest in the cultural heritage of different regions. Inspiring stories of men and women overcoming challenges and gender stereotypes are often shared through sports broadcasting. World Radio Day 2018 celebrates the peace-building connection between Radio and Sports!

Many Saint Lucians would undoubtedly recall when West Indies played a victorious cricket match, fans would follow favorite players like Darren Sammy’s every score on their vehicle radio as they drove from one destination to the next. Or for those who weren’t able to watch the 2008 and 2012 Olympics, listened excitedly for the details of her performance in the sporting news segments on radio stations. Media coverage of sports has indeed fostered greater unity and communication in our country.

What Can You Do?

UNESCO has suggested various activities which members of the public may engage in to celebrate World Radio Day 2018. These include creating a “Sports Music Medley”, playing an “Historic Sporting Moments” special online and on-air, creating a “Sports for Peace” segment or documentary, and reporting more on women’s and mixed sporting events within the country or region.